Augusti 20, Salto do Prego and the fumaroles in Furnas. Today we drove quite a bit eastwards to visit one of the many natural tourist attractions on São Miguel, the Salto do Prego waterfall.

Here a stop on the way to admire the view. 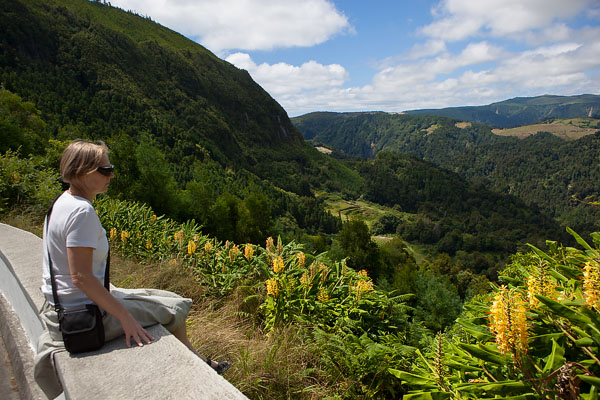 The path up to the waterfall is a rather easy walk where the beginning is the steepest. You pass an old village ruin, small banana plantation and fantastic jungle-like nature. 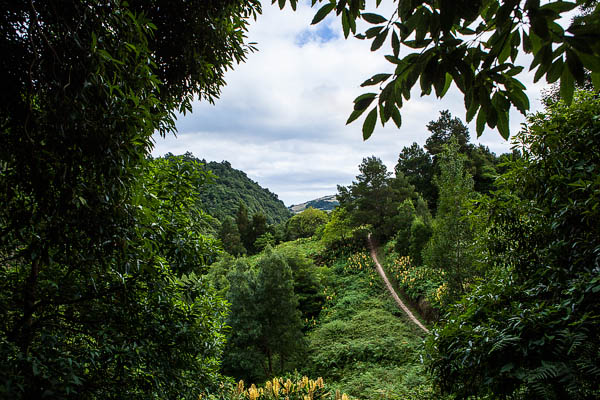 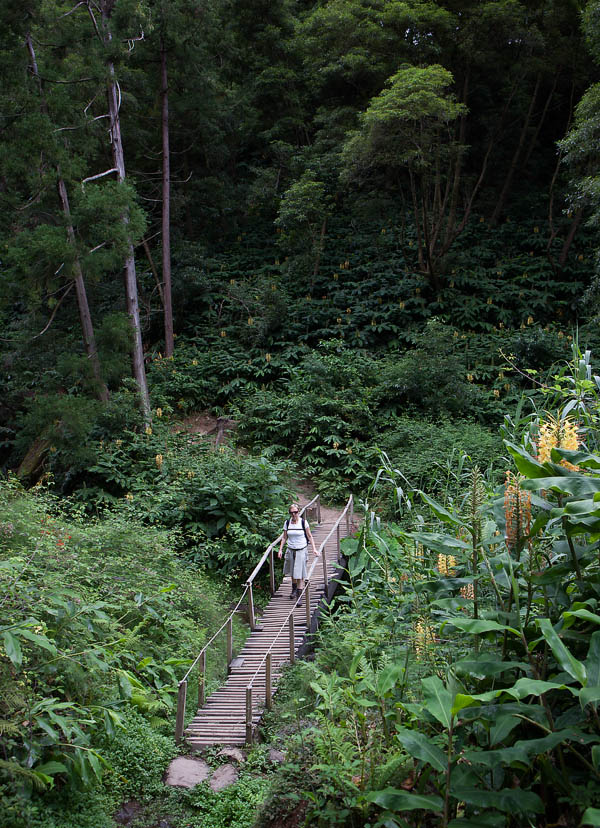 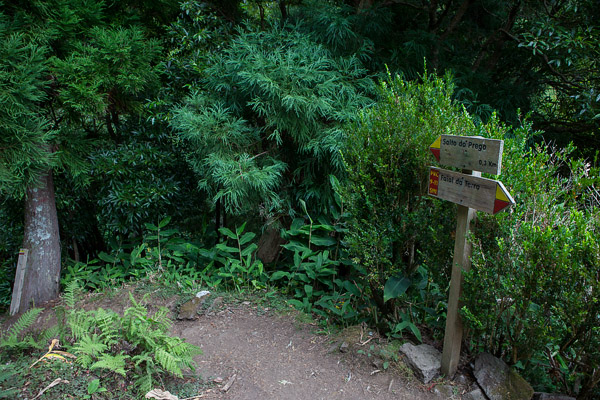 The waterfall. A refreshing swim in the cold water is a must. 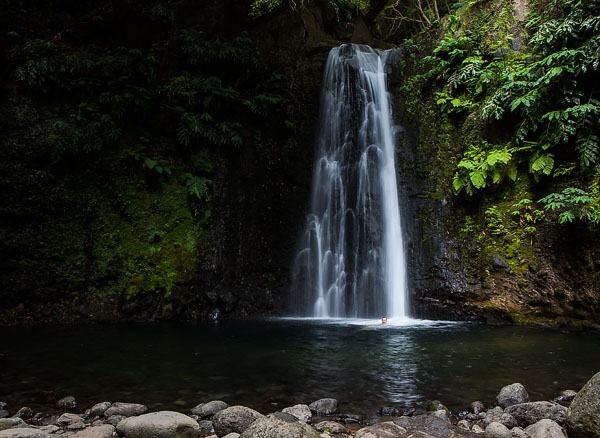 Personally I am a cowardly bather, but I can’t let an occasion like this go to waste. 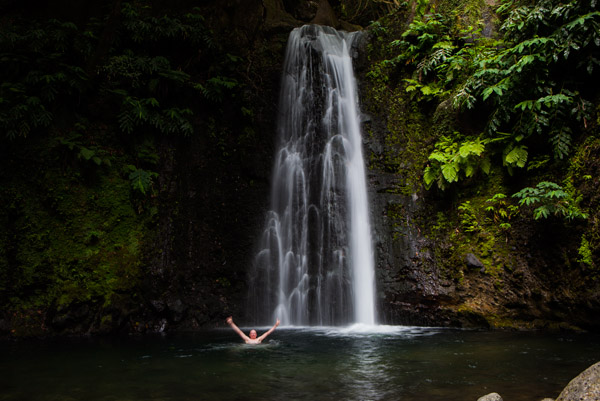 We chose an alternative route downhill and found the only levada we saw on the Azores. 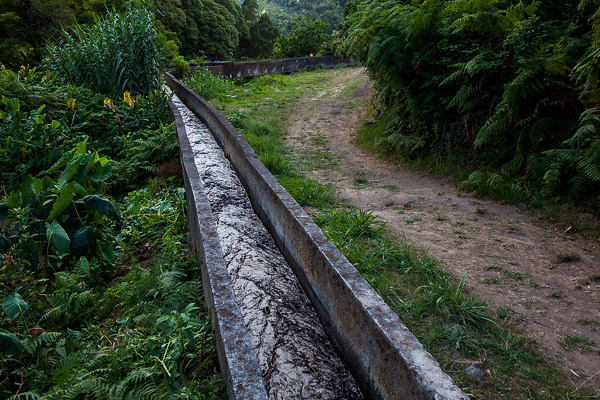 Another break to admire the view on the way home. Breathtaking. 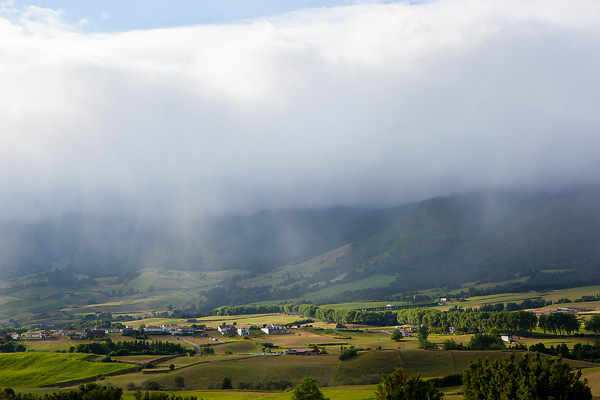 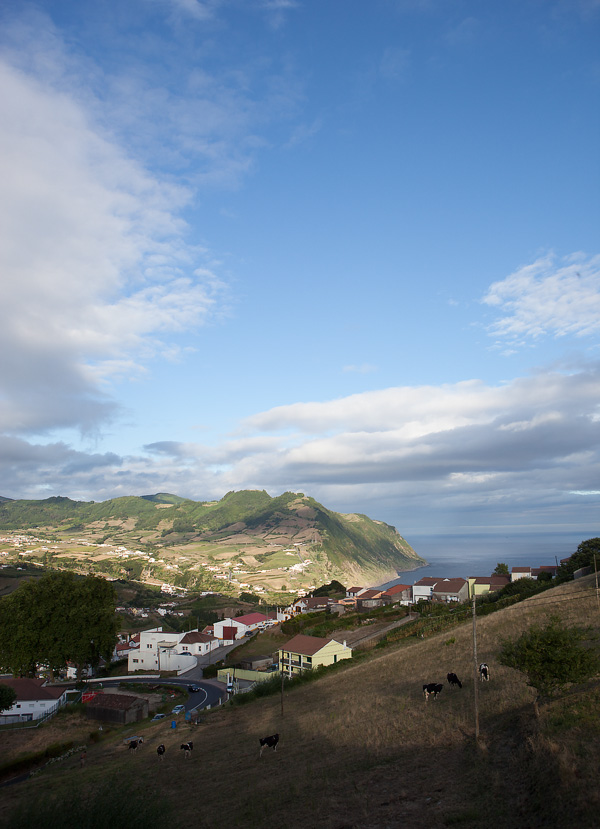 And finally we made another stop in Furnas. You can’t miss the fumaroles, oozing their sulphurous gas. 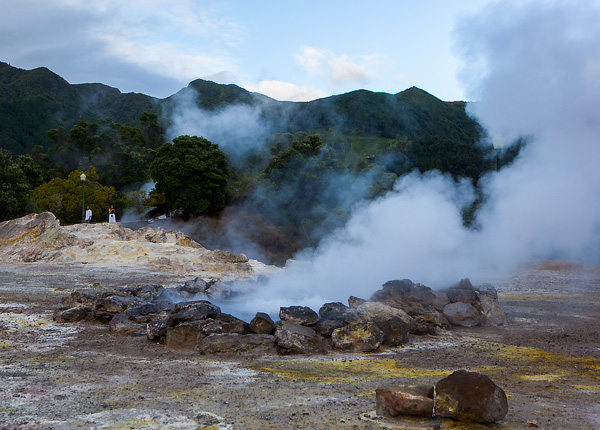 The people in Furnas use the fumaroles to slow-cook cozido, a stew you can enjoy in a restaurant nearby. 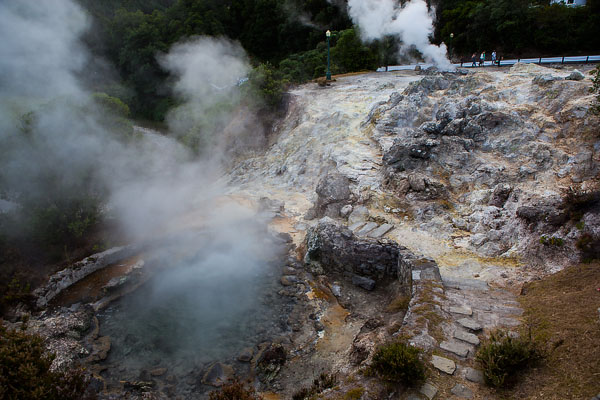 From the mysterious netherworld all sorts of substanses make their way up and colour the surface. 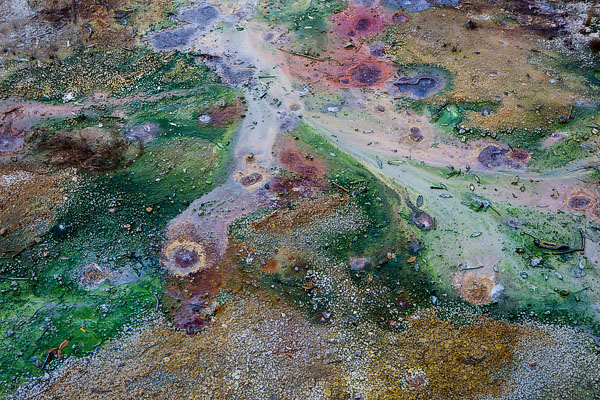 August 19 Furnas, São Miguel. Today we took our rental car to Furnas, a small town where the volcanic activity is more visible than anywhere else on the island. There is no problem going there from Ponta Delgada, half of the way is broad and nice motorway. The rest of the road is winding along with beautiful views all the way, but you can see from point to point that there are new parts of the motorway being constructed. On the way you pass a few of the bigger beaches that are situated along the south coast.

We drove about for a while on the narrow streets until we found this restaurant with a nice view where we had a simple meal. 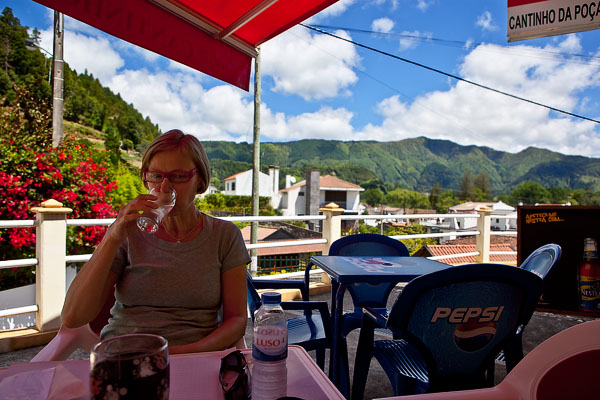 Furnas is well known for its calderas, hot springs with constantly boiling, sulphur smelling water. We visited those at a later occasion, this time we concentrated on the Terra Nostra Park, a wonderful botanical garden with tropical plant from all over the world. Most of all we wanted to have a swim in the big pool that is constantly being supplied with 40 degrees hot water from under ground. It was a treat to swim in the warm, ferrous water. Refreshing it was not, but luckily enough there are showers with ice cold water to get you cool afterwards. 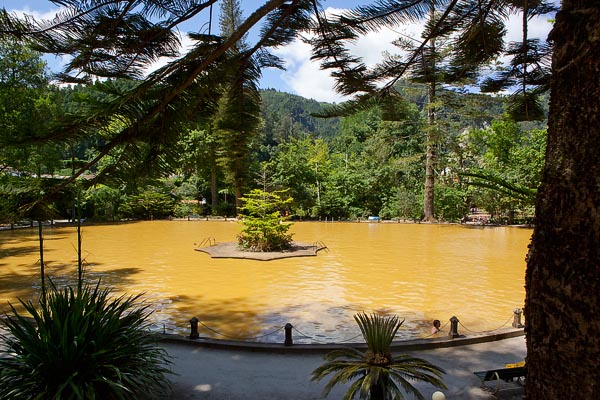 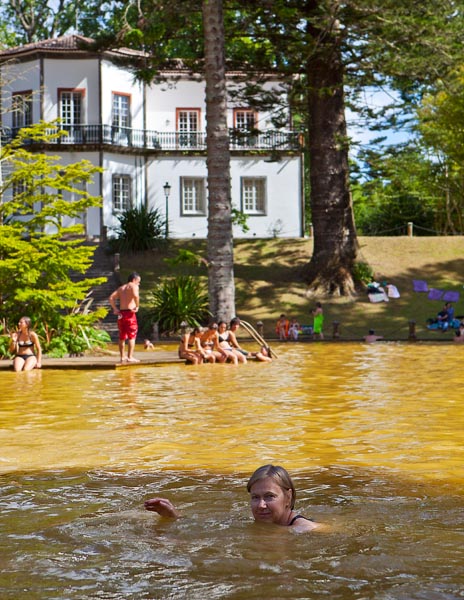 A walk through the Terra Nostra Park is a fascinating experience. This giant of a tree, a Metrosideros Robusta from New Zealand, is next to the entrance. 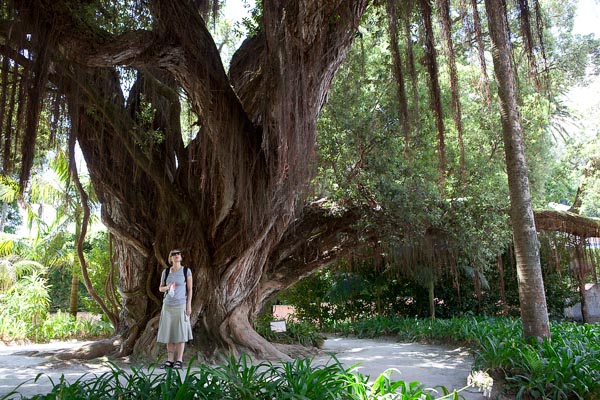 In the most distant part of the park there are dense thickets of bamboo, an efficient natural fence. 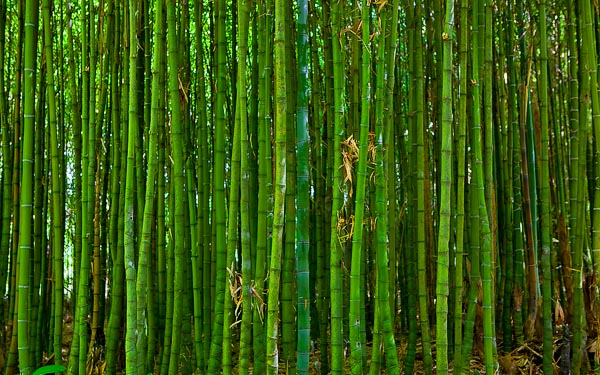 I have seen many swans in my life, but this is my first encounter with a black swan. 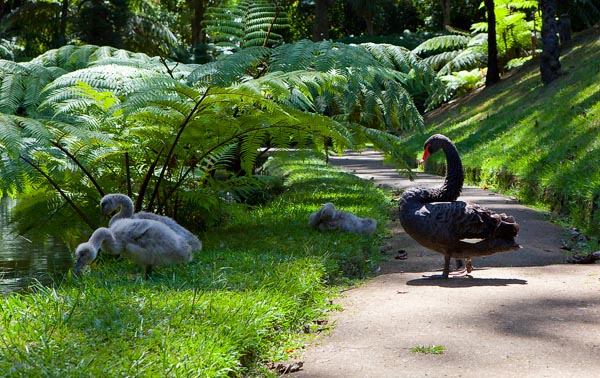 Naturally, there are domestic plants in the park, and it is hard to think of anything more domestic on the Azores than Hortensia. 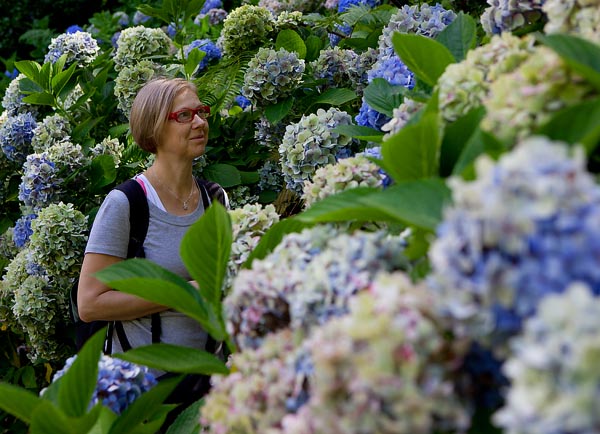 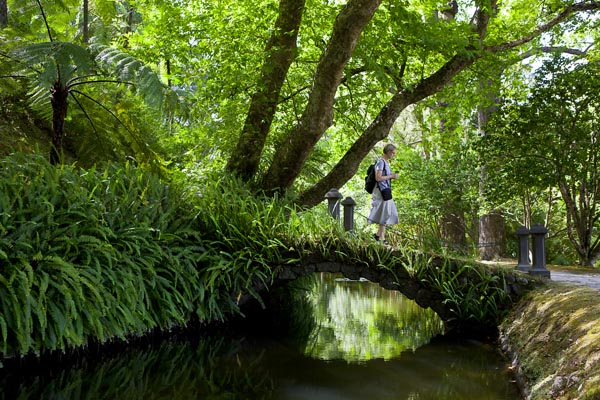 There was some time to walk in the town before turning back. The calderas, the hot springs, we saved for another day, but we managed to have a look at the upturned house. The architect thought it was a splendid idea until he used the bathroom for the first time. 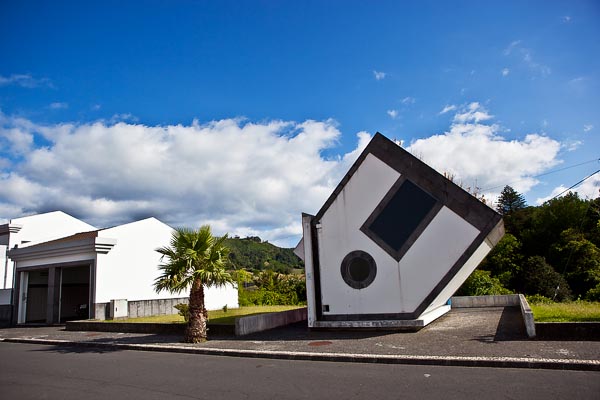 A nice view from Furnas. The millwheel is turning, but that is all it does. The bougainvillea is magnificent. 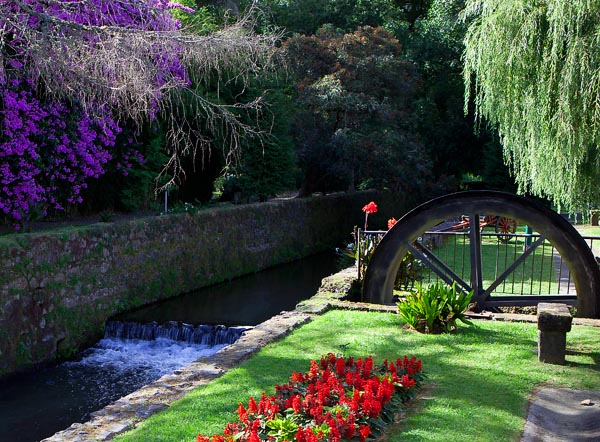 Close-up of the bougainvillea. 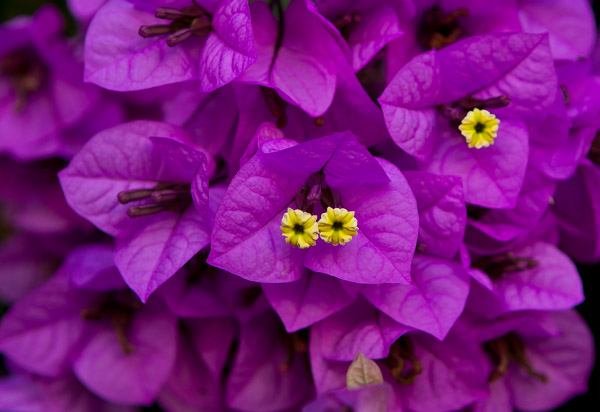 Finally a picture from the terrace of our hotel room in Ponta Delgada. Not much of a view, but then again we didn’t spend much time at the hotel. 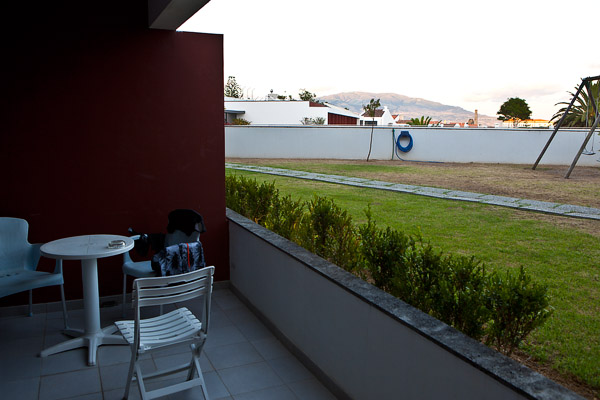 August 18, Ponta Delgada, São Miguel. We arrived at Ponta Delgada in the afternoon and had time to walk around a bit and have dinner on the restaurant pier off the marina. It is a beautiful town with plenty of interesting stuff to watch, but it doesn’t distinguish itself in any particular way among other tourist towns. Actually, except for the marina area, it is not so much of a tourist town, tourism is still a comparatively new business on the Azores. The greatest experience of the island was its overwhelming nature. More about that in coming posts.

The first picture happened to be of the elegant walking bridge crossing the shoreline thoroughfare. 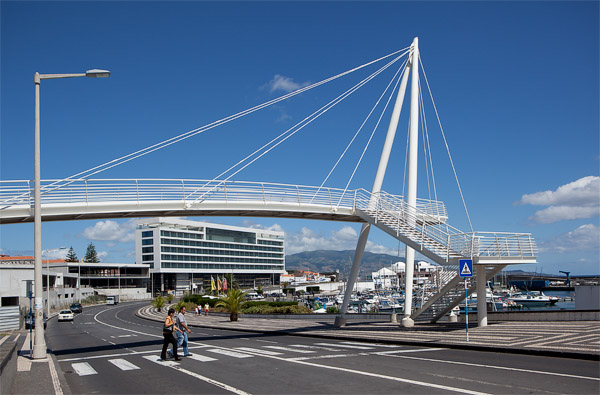 The marina hotels. Nothing to see here. The quay inside the pier is a bathingplace, mostly frequented by the locals. 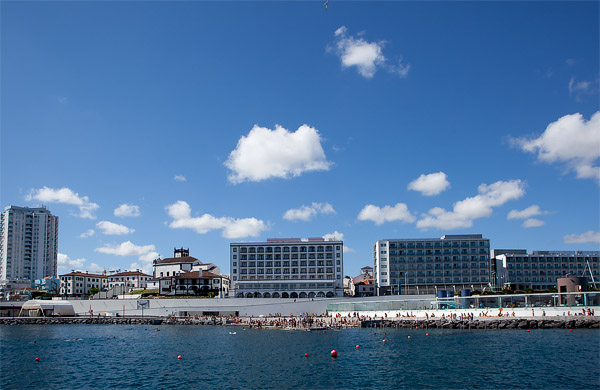 Souvenir stands waiting for the evening. 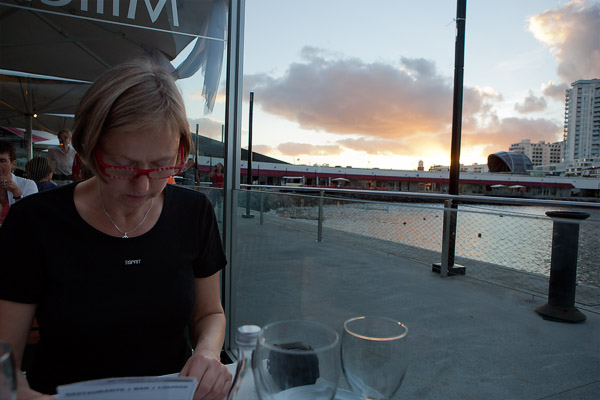 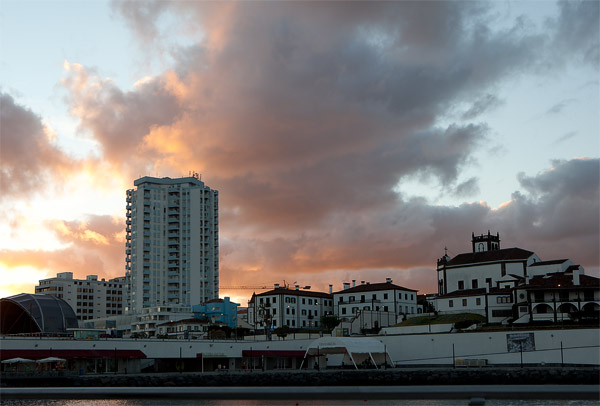